Despite the current difficulties being experienced by all industry sectors due to the COVID-19 pandemic, UK-based TDI Production Solutions, in partnership with transport specialist Deltrain of Portugal, have announced their successful entry into the North American attractions market with a number of new projects in 2020.

The orders received involve a total of 12 land trains, seven of which are battery powered. The first of these, the Tagus, which is based on the VW Amarok with a 3 litre, Euro 6 diesel engine, was delivered to Guadalajara Zoo in January this year to replace an original trains bought in the 1990s. Significantly, the site has a number of steep, 10 per cent plus gradients and the Tagus is required to climb these while pulling four carriages, each of which carry a total of 80 passengers. It therefore truly has its work cut out but has proved an ideal solution for the venue and a real ‘workhorse.’

A second delivery was to Toronto Zoo which is now home to four Tagus Euro 6 diesel trains, each pulling three of Deltrain’s new 28-seat carriages. These units are all fully enclosed with heating systems to allow the trains to operate throughout the year. The carriages have also been specially designed with drop-down windows to give the feel of an open carriage in the hotter months. As a bespoke feature, one carriage on each of the four trains has two (one each side) electric wheelchair lifts allowing the venue to board guests in wheelchairs from either side.

Northwest Trek (NWT), located south of Seattle, has also benefitted from the addition of new land trains. These replaced the site’s existing diesel trams with six new Vision electric land trains. As NWT is a wildlife park, the new trains have been adapted to be heated and used all year round to provide the perfect platform for passengers taking photographs of the animals on route.

And a fourth delivery has also been completed in 2020, this being to Albuquerque Biopark in the shape of an Electric Delga with three open carriages. The client in this instance opted for a western style power car to match the heritage of the area but with the latest battery power unit as part of the city’s drive towards eco-friendly transport systems. The train will run along the famed Rio Grande River for two miles and link visitors to the aquarium. 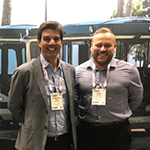 If you have any queries, feel free to get in touch!